Organic Eden Tamari Soy Sauce is made by master brewers, skilled in the art of koji fermentation handed down through generations. Made from whole Non-GMO organic soybeans inoculated with koji Aspergillus oryzae, water and the finest sea salt. It is carefully tended and aged in cedar casks through two seasonal cycles.

Eden Imported Tamari was named the best out of seven brands sampled by an expert panel of tasters in the San Francisco Bay area. The San Francisco Chronicle organized the tamari taste test for its 'Tasters Choice' column. Panelists were Linda Anusasananan, food writer and consultant, San Mateo; John Carroll, cookbook author, San Francisco; Amanda Gold, San Francisco Chronicle Food staff; Shelley Handler, consultant, San Francisco; and Roland Passot, chef-owner, La Folie and five Left Banks. "In judging tamari, the panel looked for a smooth, rich flavor balanced by the right amount of salt," the Chronicle reported. "Common problems were harsh or sweet notes, or too much salt." The tamaris were served plain and with white rice. "The top tamari, in the panel's opinion, was Eden's imported version with the green label, which is organic and made in Japan in the traditional long-fermented way… This tamari was dark and thick, almost syrupy. Its flavor was 'rounded,' with a 'nice complexity of flavor' that balanced salt and caramel." ("Top Tamari Balances Sweet and Salty," San Francisco Chronicle , 28 March 2007.) Organic Eden Imported Tamari earned 69 out of a possible 100 points. Other brands sampled earned from 14 to 60 points. Eden's domestically produced, U.S. Naturally Brewed Organic Tamari (plum label) placed third in the taste test with 55 points. Panelists' comments included "Balanced taste," "salty, but not overly so," and "good flavor."

Originally the world's first soy sauce was tamari, the byproduct of making Hacho miso, a soybean paste. It was the prized liquid that rose to the top of the cask as the miso was aging. This original 'true' tamari had a very thick consistency, a strong distinct flavor and aroma, and was the color of dark chocolate. For centuries this prized liquid was reserved for special occasions and was not available to the general public. Over the centuries master brewers discovered that they could produce more tamari by simply increasing the amount of liquid in Hacho miso production. This specially brewed sauce was thinner but had qualities similar to 'true' tamari.

Although Eden Tamari Soy Sauce is not the 'true' liquid from Hacho miso production, it is the specially brewed all purpose tamari soy sauce. Eden Tamari has a flavor that is reminiscent of miso and more pronounced than that of shoyu, with a thicker consistency and a deeper brown color. Unlike shoyu, that derives much of its flavor from the natural alcohol produced by the fermentation of wheat, tamari's rich flavor and aroma is due to the abundance of amino acids derived from soybeans.

In the 1960's George Ohsawa introduced macrobiotics to the West and first introduced a natural soy sauce that he called 'tamari'. This soy sauce was not a 'true' tamari, but a soy sauce called 'shoyu' in Japan. The product he called 'tamari soy sauce' was made of soybeans, wheat, koji, water and salt. Mr. Ohsawa wanted to distinguish naturally processed soy sauce, traditional shoyu, from commercial, chemically processed soy sauces marketed under the name 'shoyu' at the time. He did not anticipate the introduction of real tamari into North America, as it was a rare commodity. Purposely and unfortunately, misnaming the product 'tamari' eventually led to much linguistic confusion in the 1980s when 'wheat free' and 'real' tamari were introduced. Eden Tamari Soy Sauce is a real, wheat free sauce.

Soy sauce should be chosen with care as one would choose a fine wine or olive oil. Eden's traditional brewing of Shoyu and Tamari takes two to three years. Today genuine soy sauce is rare. Many commercial soy sauces are made with sugar, water, salt, and caramel coloring, and preservatives. Often genetically engineered soy meal that has been defatted using a hexane extraction process and genetically engineered enzymes are used. Many commercial producers of tamari soy sauce add ethyl alcohol as a preservative. We add a bit of naturally fermented grain alcohol derived from organic rice to preserve freshness. 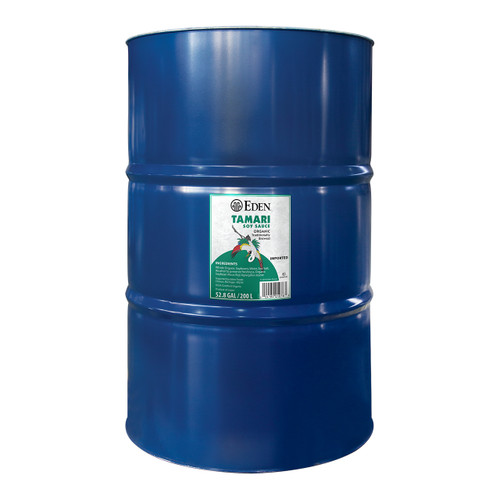