Organic Eden Tamari Soy Sauce is made by master brewers, skilled in the art of koji fermentation handed down through generations. Made from whole Non-GMO organic soybeans inoculated with koji Aspergillus oryzae, water and the finest salt.

Originally the world's first soy sauce was tamari, the byproduct of making Hacho miso, fermented soy paste. It was the prized liquid that rose to the top of the cask as the miso was aging. This original 'true' tamari had a very thick consistency, a strong distinct flavor and aroma, and was the color of dark chocolate. For centuries this prized liquid was reserved for special occasions and was a rare commodity. Over the centuries master brewers discovered that they could produce more tamari by simply increasing the amount of liquid in Hacho miso production. This specially brewed sauce was thinner but had qualities similar to 'true' tamari.

Although Eden Tamari Soy Sauce is not the 'true' liquid from Hacho miso production, it is the specially brewed all purpose tamari soy sauce. Eden Organic Tamari has a flavor that is reminiscent of miso and more pronounced than that of shoyu, with a thicker consistency and a deeper brown color. Unlike shoyu, that derives much of its flavor from the natural alcohol produced by the fermentation of wheat, tamari's rich flavor and aroma is due to the abundance of amino acids derived from soybeans.

In the 1960's George Ohsawa introduced macrobiotics to the West, and first introduced a natural soy sauce that he called 'tamari'. This soy sauce was not a 'true' tamari, but a soy sauce called 'shoyu' in Japan. The product he called 'tamari soy sauce', was made of soybeans, wheat, koji, water and salt. Mr. Ohsawa wanted to distinguish naturally processed soy sauce, traditional shoyu, from commercial, chemically processed soy sauces marketed under the name 'shoyu' at the time. He did not anticipate the introduction of wheat free tamari into North America, as it was a rare commodity. Purposely and unfortunately, misnaming the product 'tamari' eventually led to much linguistic confusion in the 1980s, when 'wheat free' and 'real' tamari were introduced. Eden Tamari Soy Sauce is a real, wheat free soy sauce.

Soy sauce should be chosen with care as one would choose a fine wine or olive oil. Eden's traditional brewing of Shoyu and Tamari takes two to three years. Today genuine soy sauce is rare. Most commercial soy sauces are made with sugar, water, salt, caramel color, genetically engineered artificially derived enzymes and preservatives. Often genetically engineered soy meal that has been defatted using a hexane gas extraction process is used. Many commercial producers of tamari soy sauce add ethyl alcohol as a preservative. We add a bit of naturally fermented alcohol derived from organic cane to preserve freshness. 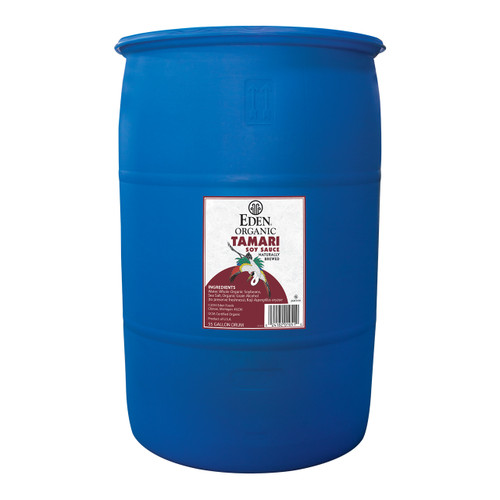