Organic U.S.A. family farm partially pearled barley with a lot of the bran layer still intact. Most pearled barley has 100% of the germ and bran layer removed. Eden pearled barley is more nutritious because significantly less germ and bran are removed. Quick cooking, no need for soaking. Its mild flavor and texture complement soups and stews. Simply boiled it is a deliciously light whole grain dish, or thinned as warming breakfast porridge. It always goes well with other whole grains. Rich in fiber and manganese. A good source of protein, niacin B3, and zinc.

Barley Horedeum vulgare is the oldest cultivated grain, believed to have originated in northern Africa and southeast Asia. It was grown in Egypt between 6,000 and 5,000 B.C. for both man and animals. It was the main bread grain of the Hebrews, Greeks, and Romans until it was replaced by wheat and rye. It was cultivated in China over 4,000 years ago. It was so highly valued it was a unit of measurement in Sumaria 4,000 to 2,000 B.C., and used as standard currency in Babylonia. British and Dutch colonists brought barley to North America, not so much as food, but for malting, making beer, and barley malt syrup. Barley remains a staple in many countries. It is popular in vegetarian and macrobiotic cooking, and essential in many Middle Eastern dishes.

Eden Pearled Barley is low fat, saturated fat and cholesterol free, very low sodium, and an excellent source of fiber and manganese. According to FDA, "Diets rich in whole grain and other plant foods, and low in total fat, saturated fat, and cholesterol may reduce the risk of heart disease and some cancers." Also, "Low fat diets rich in fiber-containing grain products, fruits, and vegetables may reduce the risk of some types of cancer, a disease associated with many factors." Eden Pearled Barley is a good source of protein, niacin B3, and zinc.

Eden Pearled Barley is quick cooking, no need for soaking. A mild flavor and slightly chewy texture goes great in soups and stews. Simply boil it for a deliciously light whole grain dish or salad. Adding extra water creates a warming breakfast porridge. It goes well with every other whole grain. Pearled barley can be cracked to make barley couscous and this is frequently found in the Middle Eastern countries. It makes a great flour for enhancing breads and other baked goods.

To cook Eden Pearled Barley first rinse under cold water. There is no need for soaking this quick cooking grain. Just place in a heavy pot with a pinch of Eden Sea Salt or a 1 inch piece of Eden Kombu and 2 cups of water per cup of barley. Cover and bring to a boil. Reduce the flame and simmer for 35 to 40 minutes until tender, light and fluffy. To pressure cook use 1 1/2 cups of water and cook for 15 to 20 minutes. Remove from flame and allow pressure to come down before removing the lid. 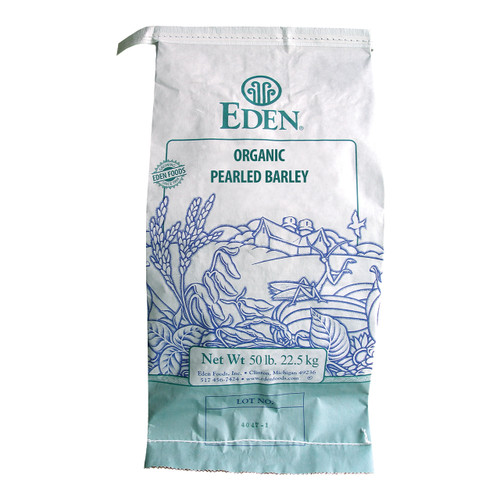