Organic Eden Millet Panicum miliaceum is U.S.A. family organically grown and simply milled to remove its hard inedible hull. Round, yellow, and small (just a little larger than quinoa), millet is a rare alkaline producing grain. Eden Organic Millet is light and fluffy with a mildly sweet, nutty flavor. It cooks in 30 minutes.

Millet is the common name given to more than 6,000 species of wild annual grasses found throughout the world. Those belonging to the Poaceae (Gramineae) or grain family are small seeded annual grasses, including a variety of cereals that may be used both as human food and for animal forage. Millet is gluten free and is embraced by many with sensitivity to modern wheat or other grains containing gluten.

Many people think of millet as the main ingredient in bird seed, but it's not just for the birds. Millet is believed to be one of the oldest human foods and the first domesticated cereal. Historians believe seeds from wild millet plants were domesticated and cultivated simultaneously in Asia and Africa over 7,000 years ago and from there spread throughout the world. In the Old Testament book Ezekiel 4:9, millet is mentioned as a grain used in making bread. Today, millet ranks as the sixth most important cereal grain in the world and is a significant staple in northern China, Manchuria, Mongolia, Eastern Europe, Russia, India, and Africa. Even the stalks of the millet plant are used to make a very useful item found in every home - the common broom.

According to the FDA "Diets rich in whole grain and other plant foods, and low in total fat, saturated fat, and cholesterol may reduce the risk of heart disease and some cancers." Also, "Low fat diets rich in fiber-containing grain products, fruits, and vegetables may reduce the risk of some types of cancer, a disease associated with many factors." Eden Organic Millet is low fat, contains no saturated fat or cholesterol, a good source of fiber, protein, thiamin B1, magnesium, zinc, and manganese. It is also a complete protein source containing all essential amino acids. Gluten Free. 100% whole grain.

Millet is extremely versatile whole grain. Determined by the amount of water used in cooking, it can be light and fluffy or soft and creamy. Eden Organic Millet is delicious plain, with fresh or dried fruit, or with sweet vegetables such as winter squash and sweet corn. Serve it as porridge and as a main grain for lunch or dinner. Millet tastes great with just about any condiment such as Organic Eden Gomasio, Eden Shake, and Eden Dulse Flakes, or with roasted seeds or nuts. For best results and to impart a nuttier flavor and fluffier texture, dry roast the washed millet in a cast iron or heavy skillet, over a medium-low flame, stirring constantly until golden, and then cook according to package directions. It is deliciously creamy and soothing in soups and stews, and can be used to make grain burgers, croquettes, salads, and in desserts, whole grain muffins, breads, pancakes and waffles. It makes awesome millet mashed potatoes; just cook millet with cauliflower and mash. You can even use it to make stuffing for squash and cabbage rolls. 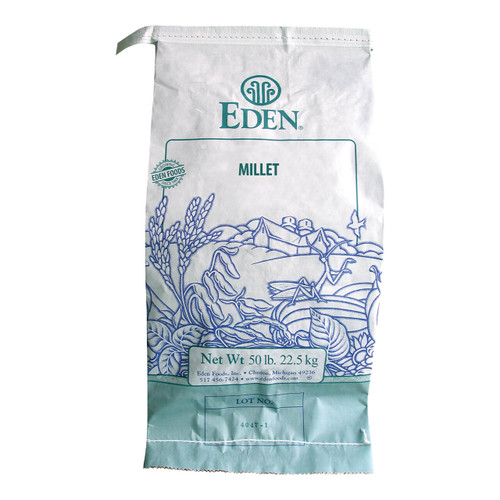