North Dakota family organically grown. Buckwheat is not related to wheat and is Gluten Free. Hulled buckwheat groats are quick cooking whole grain, just 20 minutes. Mild, light, and energizing, high in thiamin B1, magnesium, and manganese, and a good source of protein, niacin, and zinc B3. Nature's best source of the important nutrient rutin. Enjoy it as an entrée, as or in porridge, in soups, salads, stuffed cabbage, grain burgers, and more. 100% whole grain. Packaged in a reclosable, protective, standing pouch.

Organic Eden Buckwheat is North Dakota family organically grown and simply milled to remove its hard hull, leaving the whole grain intact. Often referred to as hulled or raw buckwheat groats, it should not be confused with roasted buckwheat or 'kasha', which has stronger flavor.

Buckwheat seems to have originated simultaneously around Lake Baikal in Siberia, in the Himalayas, and in Manchuria where it was domesticated and cultivated around 6,000 BC. It spread to other Asian countries and Japan via Buddhist monks. During the Crusades, Saracen traders brought buckwheat from Asia to Europe where it has remained a staple food, especially in Russia and central Europe.

Despite the name, buckwheat Fagopyrum esculentum is not related to wheat and is gluten free. It ranks quite low on the glycemic index.

Buckwheat is a hardy, herbaceous plant with broad leaves and very fragrant white and pink flowers. Often mistaken as a wild grass, it is not a grass, but rather related to Chinese rhubarb and sorrel. Buckwheat belongs to the Polygonaceae family. Although not a member of the cereal grain family Gramineae, it is eaten and used as a cereal grain.

Buckwheat gets its name from the Anglo-Saxon words 'boc' meaning beech and 'whoet' meaning wheat. The name refers to buckwheat's brownish-black pyramidal seed that although much smaller, resembles a beechnut from the beech tree. Dutch settlers introduced 'boecweite' to colonial America, planting it in New York State and Pennsylvania. Buckwheat was once one of American's most popular breakfast porridges.

Buckweat is extremely versatile with mild flavor and superb nutrition. Its protein is superior to that of most cereal grains, providing all amino acids including the essential ones. It is Nature's best source of the important nutrient rutin, an efficacious vitamin C complex flavonoid. Organic Eden Buckwheat is 100% whole grain. According to the FDA, "Diets rich in whole grain and other plant foods, and low in total fat, saturated fat, and cholesterol may reduce the risk of heart disease and some cancers." Also, "Low fat diets rich in fiber-containing grain products, fruits, and vegetables may reduce the risk of some types of cancer, a disease associated with many factors." Eden Organic Buckwheat is low fat, saturated fat and cholesterol free, and sodium free. Mild, light, and energizing Eden Organic Buckweat is high in thiamin B1, magnesium, and manganese, and a good source of protein, niacin B3, and zinc. 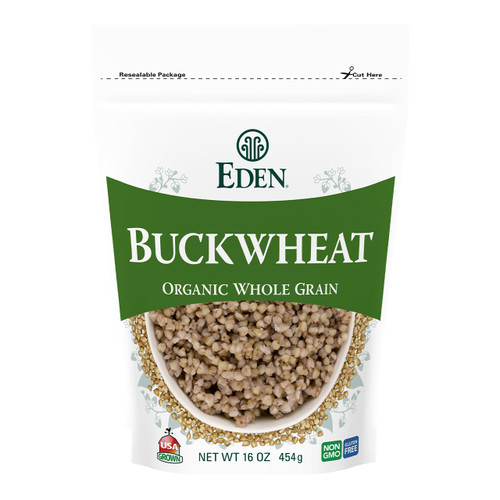