Energizing 100% whole grain organic noodles with a rich, warming flavor. Buckwheat protein is superior to other cereal grain as it has all essential amino acids, and is the best source of the important flavonoid rutin. It is traditionally made and patiently two-step dried. Despite the name, buckwheat is not wheat and is not related to wheat. A delicious, versatile, strengthening food, enjoy it hot or chilled in dashi - a shoyu soy sauce kombu broth and in salads and stir-fries. Wrap it in toasted nori to make delicious noodle sushi. It provides fiber and protein with no salt added.

Eden 100% Buckwheat Soba is 100% whole grain noodles with a rich, warming flavor. It is traditionally made in Japan and patiently two-step dried into a delicious and easy way to enjoy the flavor and exceptional health benefit of buckwheat. Soba is Japanese for buckwheat. In Japan, 100% pure Buckwheat Soba is called 'kiko uchi'.

Eden 100% Buckwheat Soba is a bracing food made in Japan. It is made from only two ingredients – 100% whole grain organic buckwheat and purified water. Buckwheat is naturally gluten free, a special method was developed to prepare ‘pre-gelatinized’ flour that increases the binding power of buckwheat. Pre-gelatinized flour is made by puffing whole grain buckwheat with the hull on, similar to the process used for making puffed cereal, then grinding the puffed buckwheat into fine flour. The pre-gelatinized flour is then blended with regular buckwheat flour forming a 60/40 percent ratio. Water is added to form dough, which is then kneaded, rolled, and cut. The noodles are then dried and cut to length. Eden 100% Buckwheat Soba is gluten free and skillfully made in a wheat, gluten, and egg free facility that is dedicated only to buckwheat production.

Commonly people avoid buckwheat in the mistaken belief that it's a type of wheat. Despite the name, buckwheat is not wheat, is not related to wheat, and is gluten free. Its old northern European name was 'beech wheat' in reference to its small, black, triangular seeds that although much smaller, resemble beech nuts of a beech tree. From 'beech wheat' came the Dutch name 'boecweite' or 'boekweite': 'boek' meaning beech and 'weite' meaning wheat. After Dutch settlers introduced 'boecweite' to colonial America, it gradually became known as 'buckwheat'.

Buckwheat Fagopyrum esculentum is a hardy wild, broad leaf plant crop, and not a grass. It belongs to the Polygonaceae or buckwheat family and is not a member of the cereal grain or Gramineae family. The fruit seed of the buckwheat plant has long been valued as important food in the East and West. It originated in the Lake Baikal area of Siberia, in the Himalayas, and Manchuria. Buckwheat was cultivated and eaten in China before being adopted throughout Asia and Europe. It has been a staple food in Russia and central Europe for centuries where it's best known as 'kasha.'

The art of making noodles is believed to have originated among farmers in China, were introduced to Buddhist temples, and taken to Japan by monks. The first reference to soba or buckwheat in Japan appears in records from the Heian period AD 794 to 1185. Soba noodles or 'soba kiri' are mentioned in documents from the early 1600s.

Eden 100% Buckwheat Soba is gluten free and skillfully made in a wheat, gluten, and egg free facility that is dedicated only to buckwheat production.

Eden 100% Buckwheat Soba is a delicious, versatile, strengthening food. Enjoy it hot or chilled in dashi - a shoyu soy sauce kombu broth and in salads and stir-fries. Wrapped in toasted nori it makes delicious noodle sushi. It is important not to overcook cook 100% Soba. The very low level of gluten in buckwheat makes it fragile if overcooked.

Soba and Udon can be boiled just like other pasta or you can use a traditional Japanese cooking method which takes a little longer but is well worth it. This method is called the shocking method, cold water is added to boiling water several times during the cooking process creating a firmer, al dente noodle. For this method place 2 quarts of cold water in a large pot, cover, and bring to a boil. Remove the cover, add the noodles, and stir to prevent sticking. As soon as the water comes to a boil again, add enough cold water to stop the water from boiling (about a 1/2 cup). Bring to a boil again, and add cold water again. Repeat one or two additional times until the noodles are done. Periodically check the noodles by removing a strand and biting or cutting it in half. If the center of the noodle strand is white and the outside is darker, the noodles are not done. When the center of the noodle is the same color as the outside, and the noodles are firm yet tender to the bite they are done. Rinse cooked Udon and Soba noodles under cold water. This lowers sodium and prevent clumping. 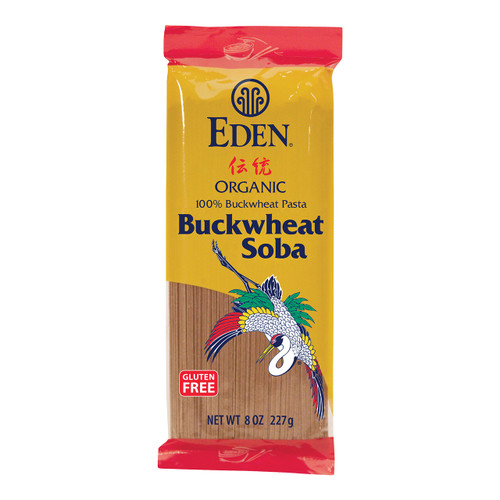