Hand-picked, early spring green tea leaves with organic Tanzanian ginger root. Proverbs say, “Everything good is found in ginger, it is essential to health and longevity.” Soothes, warms, and brightens. Green tea with ginger is delicious served hot or chilled.

All true teas stem from the plant Camellia sinensis, an attractive perennial shrub about five feet tall with gentle rounded leaves and tender twigs. Tea becomes green, black, or other varieties depending upon the time of harvest, and the way it is cured and handled. Tea begins to oxidize as soon as it is picked. Chinese and English teas allow oxidation to proceed as they dry, but with Japanese green tea, oxidation is skillfully halted by the steaming and rubbing process.

Herbal teas are not true teas and do not contain any tea leaves at all. They are infusions that are made from many types of plants or combinations of plants simmered in boiling water. Each herb has various healthful attributes such as plant chemicals known as polyphenols and flavonoids, volatile oils, and antioxidants.

Organic Eden Sencha Ginger Green Tea is a delightful combination of the best of both - green tea and herbal infusion. Premium Sencha Green Tea is expertly blended with ginger root resulting in a tea with the bold piquancy and aromas of ginger and smooth undertones of soothing green tea. Loaded with antioxidant health benefit from green tea's catechins and the volatile oils of ginger.

Eden Sencha is organically grown on a remote, centuries old tea plantation near Uji, Japan, the Nagata Co-op. In early spring, the bushes are shaded with netting or traditional bamboo screens to protect new leaves from harsh sun. Most commonly, the first spring leaves are made into gyokuro jewel tea, Japan's rarest tea and also the one used to make ceremonial grade, powdered green tea matcha. At the Nagata Co-op these first, most prized leaves are used to make Eden Sencha green tea, also the foundation of Eden Sencha Blends.

The Nagata Co-op replenishes the soil only with vegetable quality compost. They do not use manure, chemical fertilizers, herbicides, or pesticides. While commercial tea is sprayed with chemicals 15 to 20 times per year, the Nagatas completely rejected chemical agriculture in 1974. Chemically grown plants burn out in about twenty years, but the Nagata bushes produce for 40 years or more, some for as long as 100 years.

Ginger Zingiber officinale is native to tropical southern Asia where it has been cultivated since ancient times. Chinese sailors used it not only as a vegetable on long voyages, but as a source of vitamin C and as an antidote for motion or sea sickness. Fresh ginger root was typically planted in pots and kept onboard, a practice that was eventually adopted by Arab traders, hence the spread of ginger root to other parts of the world.

The ginger plant requires good rainfall and fertile soil, which are necessary for successful production of its roots or rhizomes. Much of the world's ginger root cultivation today is done by small farmers in tropical areas. The ginger root in Organic Eden Sencha Ginger Green Tea is organically grown in Tanzania where the use of ginger root has a long history. Its climate is ideally suited to the cultivation of ginger root.

The flavor of tea reflects the soil it is grown in, the season picked, and the curing process. Organic Eden Sencha Ginger Green Tea is tended adhering to strict organic practices. The farmers are dedicated to organic agriculture. This dedication is reflected in the use of skillfully executed traditional handling methods that preserve and enhance the tea's flavor, antioxidants, and volatile oils resulting in exceedingly fine organic tea.

Most tea bags contain a plastic that allows them to be heat sealed. We didn't think this was any way to treat good tea. Every part of an Eden tea bag reflects the highest care, from its unbleached manila fibers, to its crimped seal and 100 percent cotton string. No whiteners or plastics used.

Green tea has been the focus of medical research in many countries over the past decade. These studies affirm green tea's healthful properties. Powerful antioxidants, including epigallocatechins gallate, tannins and flavonoids, all collectively referred to as 'catechins' are cited. These polyphenols account for up to 40 percent of the tea's dry weight. Ginger root's volatile oils, especially gingerols and shogaols, soothe and strengthen. The root has been used for centuries and considered essential to digestive, circulatory, and respiratory health.

Organic Eden Traditional Teas contain no added flavorings or dyes, and are not processed using any additives whatsoever. 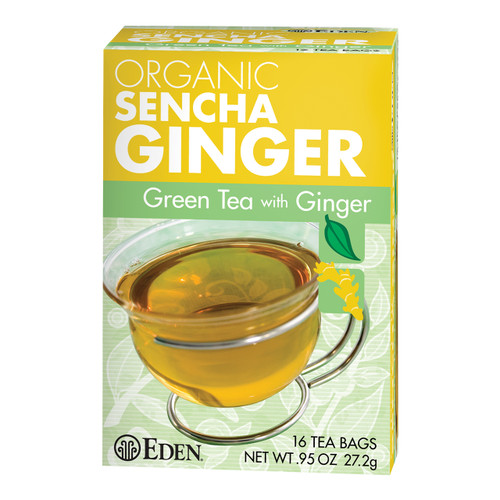