Eden Organic Pistachios are the Kerman variety famous for its outstanding flavor, organically grown on a thirteen year organic family farm in the Central Valley of California. Convenient and easy to enjoy roasted shelled nut meats. A mildly sweet, and lightly salted snack that's good for you, delivering 7 grams of monounsaturated fatty acids per 3 Tablespoon serving with zero cholesterol. They're a good source of protein, dietary fiber, and thiamin B1.

Pistachios grow on trees in heavy clumps similar to grape clusters, and like almonds have a soft outer hull. Eden Organic Pistachios are harvested in late August to early October when the hulls turn rosy and the shell splits indicating they are completely ripe. Harvesting when naturally ripe ensures the best taste. Harvesting is mechanically done by positioning two machines on opposite sides of the tree. They shake the tree for several seconds causing ripe pistachios to fall into a canvas catching frame. The frame prevents the pistachios from touching the ground which causes bruising and staining. It also prevents soil bacteria from entering the ripe nuts, preventing the occurrence of aflatoxins. From the canvas frame the pistachios fall into a bin. The bins are moved to a hulling station where the soft outer hull that encases the hard shell is removed. The hard shell is then removed. After hulling the nuts are dried, sorted, and shipped to Eden's Clinton Production facility where they are rotary oven roasted before a light misting with our finest sea salt. The pistachios are packed in resealable 4 ounce protective packages.

Pistachios Pistacia vera are often called the 'green almond' as well as the 'happy nut' or the 'smiling nut' in reference to the split, ripe pistachio's resemblance to a happy smiling face. One of the world's oldest nuts they are indigenous to the region formerly known as Persia, an area that stretched from the Mediterranean to Afghanistan where it was called 'pistah'. Archeological evidence from the area indicates that pistachios have been enjoyed for at least 10,000 years. There are only two nuts mentioned in the Old Testament, pistachios and almonds. They were grown in the hanging gardens of Babylon. The Queen of Sheba forbad commoners from growing the trees for personal use because of the limited production in her kingdom. They were reserved only for her use, which she occasionally gave as gifts to her favorites. The Persians used them in cooking, especially in sauces giving them body and creamy smoothness. In Persia it was believed that good fortune and happiness came to couples enjoying the captivating flavor of the pistachio, while listening to the cracking sound of the shells above their heads as they strolled through the orchards. When pistachios were first introduced to the U.S. in the late 1800's they were dyed bright red to hide any imperfections and stained shells due to inferior harvesting techniques at the time and to attract the attention of shoppers.

The only place in the U.S. where pistachios can be grown is in California's Central Valley. This area has a Mediterranean like growing condition for pistachios: year round abundant sunshine, long growing season, moderate cool winters, arid climate, moderate but ample water supply, and well drained fertile soil. It was in this valley that pistachios were experimentally planted in the 1930's by American plant scientist William E. Whitehouse. Mr. Whitehouse spent months in Persia collecting pistachio seeds to find the one with the most desirable traits. There was one variety, the Kerman, named after the city where the seeds came from that was outstanding. He returned with 20 pounds of seeds and began planting them. The pistachio tree needs from 7 to 10 years to mature, and 20 years to reach peak production. It wasn't until the 1970's that the pistachio became a viable commercial crop in California. Today, California is the second largest producer of pistachios in the world.

Eden Organic Pistachios are a great snack food, but they're not limited to snacking. They can be ground like almonds and used to make creamy sauces, curry, and desserts. Toss a handful into pasta stir fries, pasta salads, raw salads, fruit and Waldorf salads, pilaf, tabouli, with couscous and wild rice dishes. They can be used in muffins and cakes, party mixes, trail mixes, and granola. 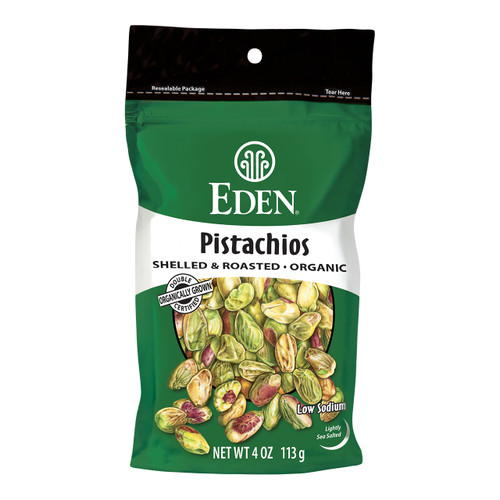