The organic native American variety, long valued as food and for its healthful antioxidants. Hand harvested, infused with organic apple juice concentrate, and slowly dried before misting with organic sunflower oil to prevent clumping. No refined sugar, sulfites, or preservatives. Very low in sodium with no salt added and low fat. Deliciously sweet and mildly tangy. Easy to keep at hand when on the go, at school, work, or home. Include them in making desserts, pastries, breads, granola, popcorn balls, muesli, hot cereal, as a salad garnish, or whatever your imagination comes up with. Reclosable standing pouch.

Contrary to popular belief cranberries do not grow in water. They grow in beds called 'bogs' made of impermeable layers of sand, peat, gravel, clay and organic decaying matter from the cranberry vines. The vines can only grow and survive when special conditions exist such as an acid peat soil, an adequate supply of fresh water for irrigation and periodic flooding, a supply of sand and a long growing season that extends from April to November. There are two main methods of harvesting cranberries - dry and wet harvesting.

Organic Eden Dried Cranberries are a native American variety Vaccinium macrocarpon organically grown on family owned cranberry bogs in Québec, Canada. Ours are wet harvested, considered by some to be the best way to harvest cranberries. First our grower floods the bog with about 12 to 18 inches of water. Next, a simple machine called a 'water reel' stirs up the water and loosens the cranberries from their vines. The water reel is nicknamed the 'egg beater' and resembles a paddle boat. Cranberries have small air bubbles in the center, and once loosened from the vines they float to the surface of the flooded bog. Harvesters wade out into the bog when all the cranberries are on the surface. Using a specially designed gathering device they hand corral the berries into a large circle forming a thick red carpet of berries which are then loaded into trucks and taken to the processing station. Here the cranberries are cleaned, sorted, and quick frozen. When ready for drying, the cranberries are thawed and infused by immersing them in organic apple juice concentrate that is circulated over them until they reach just the right sweetness or 'Brix'. The infused cranberries are then rinsed, low heat dried, and coated very lightly with a mist of organic sunflower oil to prevent clumping. The low heat drying is warm air circulated until they are dry enough to become shelf stable, requiring no refrigeration.

Unlike most commercial dried fruit, Eden Dried Cranberries contain no added refined sugar or high fructose corn syrup. We use NO sulfites, chemical preservatives, or additives of any kind.

Cranberries are native to North America and were first used centuries ago by native Americans. A versatile fruit, they discovered that it could be used not only as a food source, but also as a dye for rugs, blankets and clothing, and as a healing plant to treat arrow wounds. American Indians had many names for the cranberry such as 'sasamanesh, ibimi, and atogua'. To the Delaware Indians it was a symbol of peace. Many native Americans believed that the berries had a special power that could calm the nerves. It's current name comes from early Dutch and German settlers who named the fruit, 'crane berry', because its small, pink blossoms resembled the head and bill of a Sandhill crane.

Although folklore and anecdotal accounts of cranberries healthful properties (especially the benefits to urinary tract health) have been touted for centuries, it is recently that scientific research began revealing how healthful cranberries can be. Packed with nutrients like antioxidants and other natural compounds, cranberries are a great choice for the health conscious. The USDA recently found that the high phenolic content in cranberries delivers a potent antioxidant punch, rating it one of the highest out of 20 common fruits rated. To determine the antioxidant activity of various foods, the USDA uses a system referred to as Oxygen Radical Absorbance Capacity (ORAC). By testing the ability of foods and other compounds to subdue oxygen free radicals, the USDA was able to determine each compound's antioxidant capability. The ORAC value of cranberries is 1,750. Cranberries recently became the first fruit to carry a certified health claim in France.

Organic Eden Dried Cranberries are a delicious, healthy snack, but there's no need to limit them to mere snacking. Use Eden Dried Cranberries in baking bread, in cakes and muffins, in pie fillings and puddings, in grain and bread stuffing, pilaf and grain salads, in hot cereals or on cold cereals. They can also used in making granola, granola bars, popcorn balls and caramel corn. 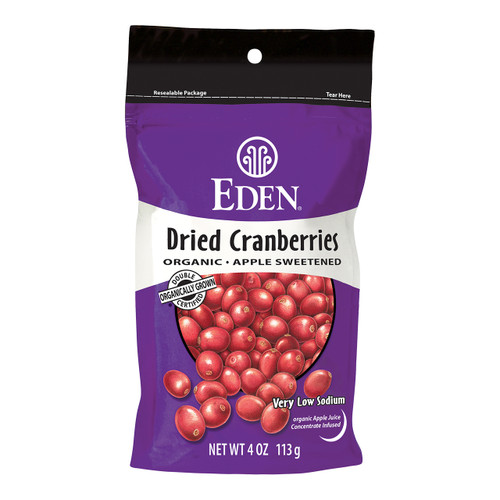