The ruffled, flowering sprout of wakame just above the root. Wild grown, hand harvested, cleaned, sun-dried, misted with pure water, shredded, and dried again. To preserve its beneficial fucoidan, do not cook. Soak it twelve minutes and just add ponzu; or blend toasted sesame oil, brown rice vinegar, and shoyu to put on it. Mildly sweet and supremely healthy. Use in soups, salads, Japanese pickles, or as a garnish on top of cooked rice and grains, traditional noodles, and in sushi rolls. Fat free and very low sodium.

Eden Mekabu is the ruffled, flowering sprout located at the base of the sea vegetable, wakame Undaria pinnatifida just above the root. Mekabu is also known as the sporophyll of the wakame plant. Eden Wakame grows wild in the environmentally protected Ise (ee-say) Shima, located in the central eastern area of the main island, Honshu. Mekabu has a pleasant, mellow sweet flavor and is highly regarded in Japan and other parts of Asia.

The wakame is hand harvested by fishermen in boats using long bamboo poles with a sickle attached that cuts the wakame loose. As the wakame floats to the surface, the fishermen pull the plants into the boats. After bringing the wakame to shore, the upper wavy fronds are removed and used to make whole dried wakame, like Eden Wakame, or instant dried flakes, like Eden Wakame Flakes. The root is removed and the remaining section, mekabu is washed before undergoing a two step drying process using both sun and slow oven drying techniques for several more hours. After sun drying thoroughly, the mekabu is misted with pure water, very finely shredded and then oven dried.

After soaking mekabu is usually seasoned and eaten as is or added to salads, without further cooking or simply added toward the end of cooking for soups. A sticky substance in mekabu, called fucoidan, is believed to be more beneficial to health in raw mekabu. Modern science affirms that fucoidan, a natural complex contained in the viscous and sticky sporophyll of mekabu, is a beneficial polysaccharide that breaks down when the seaweed is cooked. This was determined when studies were performed on the Japanese island of Okinawa, known for its highest degree of health in Japan. Fucoidan is believed to be of benefit to the immune system as well as digestive and thyroid health. For those using sea salt, sea vegetables are a source of iodine. The FDA says, "Diets low in sodium may reduce the risk of hypertension or high blood pressure, a disease associated with many factors." Eden Mekabu is very low in sodium, fat free, and cholesterol free.

Mekabu is usually eaten in small amounts, like a condiment, rather than a side dish. One teaspoon (about 1 gram) is sufficient for a serving. To prepare Eden Mekabu, first soak in hot water to cover for 10 minutes. Drain off the water and cover with cold water for 2 minutes. Then drain off the cold water. The mekabu is now ready to eat as is, with a drop or so of brown rice vinegar and shoyu soy sauce, on top of traditional noodles and broth, cooked rice or nori maki sushi rolls, and in making Japanese style vegetable pickles. When adding to soups, add the soaked mekabu at the very end of cooking, just before serving so as not to cook it. Try it in our Udon and Mekabu Salad in the recipe section. 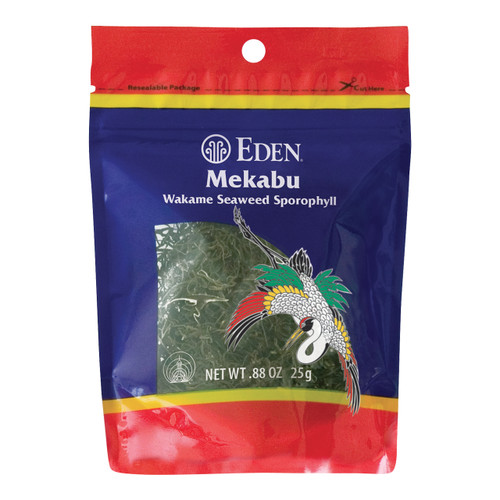