Lotus root soba of hard winter and hard spring wheat, whole buckwheat flour, lotus root powder, and a bit of sea salt. Lotus root of a water lily, Nelumbo nucifera, is traditionally valued for promoting healthy respiratory function. It imparts a creamy smooth texture. Tanaka family made as they've been doing it since 1906, now with four generations actively involved. A delicious, warming and strengthening food to enjoy hot or chilled in dashi broth with shoyu, kombu sea vegetable, shiitake mushroom, and mirin, or drizzled with ponzu. Use like any pasta in soups, stir-fries, and salads. Wrap it in toasted nori to make noodle sushi. Provides dietary fiber, protein, and iron.

Eden Lotus Root Soba is hard winter and hard spring wheat, whole buckwheat flour, lotus root powder, and a bit of sea salt. Tanaka family made as they've been doing it since 1906, now with four generations actively involved. It's an easy and delicious way to enjoy the exceptional flavor and benefit of buckwheat and lotus root.

Eden Lotus Root Soba begins with wheat flour sifted to remove most of the bran and germ, which is reserved. A good percentage of the reserved bran and germ is added back into dough as it is kneaded. Dried lotus root is ground before mixing it with the sifted wheat and whole buckwheat flour. The flours are kneaded with pure water and sea salt. Salt binds the dough, enhances flavor, and preserves the dried pasta. Dough is rolled out and folded onto itself eight times, then cut to length. Long strands of noodles are lifted onto racks, rolled into drying rooms, and allowed to dry slowly for up to two days depending upon thickness and ambient temperature, humidity. Dutifully tended, they are hand-cut and packed when perfectly finished. Patience and a no-shortcut approach create superior texture, flavor, and ultimately well nourished well-being.

Soba is the Japanese word for buckwheat Fagopyrum esculentum, a nearly forgotten healthy food with rich flavor and many benefits. Buckwheat is a hardy, wild broad leaf plant and not a grass. It belongs to the Polygonaceae or buckwheat family and is not a member of the cereal grain or Gramineae family. The fruit seed of buckwheat has long been valued in both East and West. It originated in the area of Lake Baikal in Siberia, in the Himalayas, and Manchuria. Buckwheat was cultivated and eaten in China before being adopted throughout Asia and Europe. It has long been a staple food in Russia and central Europe where known as 'kasha.'

The art of making noodles is believed to have originated among farmers in China. Noodles were adopted in Buddhist temples and were brought to Japan by monks. The first reference to buckwheat in Japan appears in records from the Heian period (794 - 1185 A.D.). Buckwheat noodles or 'soba kiri' are mentioned in documents from the early 1600s.

Eden Lotus Root Soba is low fat, and saturated fat and cholesterol free. It is a good source of dietary fiber, protein, and iron. It is easy to digest and traditionally eaten for its strengthening and relaxing qualities.

Commercial pasta is highly refined, chemically treated flour, processed in minutes through teflon dies and ultra high heat or microwave drying, resulting in inferior flavor, diminished nutrition, and dubious value. Eden Lotus Root Soba is a wise choice. Light, delicious and nourishing because it's made with patience, care, the best ingredients, and handling that enhances value.

Eden Lotus Root Soba are delicious, warming and strengthening food enjoy hot or chilled in dashi broth with shoyu, kombu sea vegetable, shiitake mushroom, and mirin, or drizzled with ponzu. Use it like any pasta in soups, stir-fries, and salads. Wrap them in toasted nori to make noodle sushi. Do not add salt to the cooking water. Unlike Eden Organic Soba and Udon these noodles are made with a bit of sea salt.

Soba and Udon can be boiled just like other pasta or you can use a traditional Japanese cooking method which takes a little longer but is well worth it. This method is called the shocking method, cold water is added to boiling water several times during the cooking process creating a firmer, al dente noodle. For this method place 2 quarts of cold water in a large pot, cover, and bring to a boil. Remove the cover, add the noodles, and stir to prevent sticking. As soon as the water comes to a boil again, add enough cold water to stop the water from boiling (about a 1/2 cup). Bring to a boil again, and add cold water again. Repeat one or two additional times until the noodles are done. Periodically check the noodles by removing a strand and biting or cutting it in half. If the center of the noodle strand is white and the outside is darker, the noodles are not done. When the center of the noodle is the same color as the outside, and the noodles are firm yet tender to the bite they are done. Rinse cooked Udon and Soba noodles under cold water. This lowers sodium and prevent clumping. 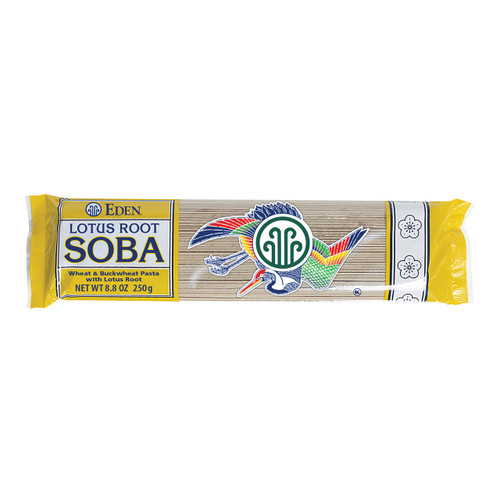