Soothing, satisfying tea of gas fired cauldron roasted tea twigs and mature leaves. Aged 2 to 3 years after roasting. Kukicha was promoted by George Ohsawa in the 1960s as the everyday tea, with every meal. Refreshing, yet not stimulating. Antioxidant health benefits. Ideal at meal's end. Lowest caffeine of Eden teas, 90% less than brewed coffee. 50% kukicha tea and 50% apple juice is an excellent beverage.

Organic Eden Kukicha Tea is crafted from four different clippings of the tea bush (Camellia sinensis). The first clipping is from three year old, semi-wild plants from which twigs from the under part of the bush are trimmed in autumn. The second clipping consists of thick twigs that are harvested every 10 years, usually in midwinter. During the autumn and winter the caffeine level is at its lowest. The third and forth clippings done every year in March and June consist of small, thin twigs, stems and mature brown dried leaves. These are the prunings that stimulate growth of fresh green shoots. After harvesting the twigs are steamed to soften them and placed outside to dry in the sun for about one week depending upon the weather. Next, the sun dried twigs are placed in brown paper sacks and stored for 2 to 3 years in order to fully develop the best flavor. This process is called aging. After aging the twigs are cut and graded according to size. The twigs are separately roasted, according to size, to ensure even roasting in gas fired cast iron rotating ovens. This patient and ceremonious roasting slowly develops the distinctive smoky flavor and aroma that has made Kukicha Tea so popular among macrobiotic and natural food aficionados. Loose tea is a traditional way to make a satisfying pot of tea.

Kukicha tea was popularized in the U.S. and Europe in the 1960s by George Ohsawa the founder of modern macrobiotics. Mr. Ohsawa considered kukicha to be the perfect complementary beverage for a grain based or mostly vegetarian diet due to its alkaline qualities and very low level of caffeine. Also known as 'twig tea' Kukicha is the lowest in caffeine of the traditional teas, 90 percent less caffeine than regular brewed coffee. It is soothing and balancing with a rich flavor and is an ideal meal's ending.

The flavor of tea reflects the soil it is grown in, the season picked, and the curing process. Eden Kukicha Twig Tea is nurtured according to strict organic standards. The growers are dedicated to stewardship of their land, water and tea bushes. This dedication shows in their skillful traditional handling that gives us the best organic tea in the world.

All true teas stem from the plant Camellia sinensis an attractive perennial shrub about five feet tall with gentle rounded leaves and tender twigs. Tea become green, black or other varieties depending upon the time of harvest, the way they are cured, and handled.

Kukicha is rich in natural tannins that aid digestion of grains and has a peculiar ability to neutralize both acids and alkalai in food. Kukicha blends well with apple juice. Simply mix half kukicha tea and half apple juice for a perfect, year round beverage. Kukicha is one of the most popular teas sold in natural food stores.

To brew loose Kukicha Tea, place 1 Tablespoon in a tea pot or in a tea ball. Add 1 quart of water, cover and bring to a boil. Reduce the flame and simmer for 5 minutes. If not using a tea ball, tea strainers are handy. The once used twigs may be reused.

Eden Kukicha Tea is produced in the ancient traditional manner as it has been for centuries. Eden Traditional Teas use no added flavorings, dyes or additives whatsoever during handling or packaging. A Satisfying, Healthy Drink. 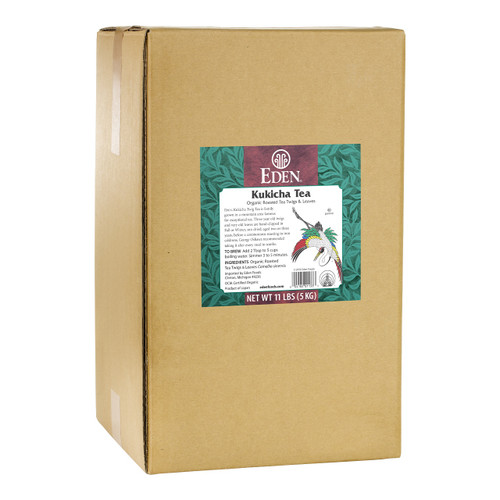