Eden Hot Pepper Sesame Oil is a delightful combination of the nutty flavor of toasted sesame seeds and hot spicy flavor of red chili peppers. Whole sesame seeds are cleaned, slowly roasted in a rotary kiln to unlock their flavor and aroma, then placed in a screw press called an 'expeller' to extract the oil. The oil is gently filtered then infused with red hot chili peppers that soak in the oil for 24 hours. The peppers are removed. Bottled in amber glass and nitrogen flushed before capping to protect and preserve its fine nutrients, flavor, and integrity.

In tropical and semitropical Asia where spices and peppers are frequently used it was discovered that the essence of hot chili peppers could be infused into sesame oil to create a delightfully hot and spicy oil. Hot spices cause capillaries at the surface of the skin to dilate releasing internal heat and inducing perspiration thus having a cooling effect on the body, making it easier to adapt to hot climates. Japanese often use red pepper as a condiment for this purpose, especially during hot summer months.

Sesame Sesamum indicum is a treasured herb native to Indonesia and Africa. It has been widely grown in tropical and subtropical Asia and in the Mediterranean region for thousands of years. The first known cultivation of sesame occurred around 3000 B.C. in the Middle East, and 1600 B.C. in Egypt. The Egyptians are credited with being the inventors of sesame oil. Sesame seeds were introduced to Japan around 645 to 793 A.D. by Buddhist priests from Korea and China. Sesame oil production in Japan was recorded during the Heian Period (794 to 1191 A.D.).

Sesame plants grow about two to five feet and produce pretty purple cone shaped flowers. There are several varieties of the sesame plant that produce creamy white, brown, black, and red seeds. When ready for harvest the seeds are encased in a protective hard shell that rattles with its precious contents. The entire plant is cut off at the base of the stem and stacked in an upright position against racks and allowed to dry. While drying the capsules that hold the seed split open. The plant is turned upside down and the seeds drop onto a cloth.

It is best to avoid commercial vegetable oil that is heated above its boiling point, treated with the solvent hexane, washed with sodium hydroxide, and chemically bleached and deodorized at 400 degrees F. For delicious and nutritious unrefined oils, choose Eden.

Eden Hot Pepper Sesame Oil is HOT. Just two or three drops adds zest to any stir fry, soup, sauce, or dressing. An excellent seasoning for grain, vegetables and noodles. Delicious in the dressing in Cold Sesame Udon with Broccoli, in this site's recipe section. 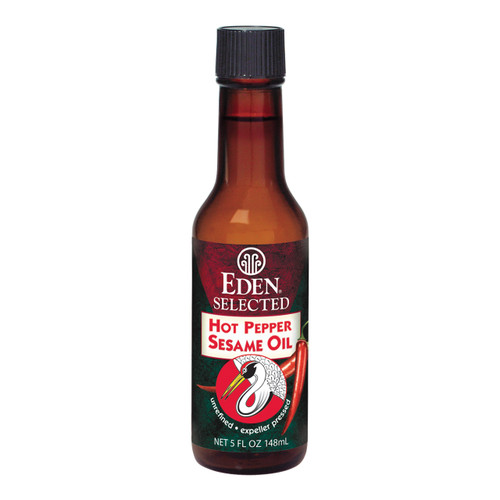