The heartiest miso, aged for three years in the traditional manner by the Hatcho Miso Company that began over 650 years ago. Their methods date back to 1337. Thick, dark, and rich. Digestive enzymes, protective soy isoflavones, and fatty acids found in miso contribute to good health. Low fat and densely nutritious. 22 pound net keg.

Eden Hacho Miso is made using whole US organically grown non-GMO soybeans and a traditional koji fermentation process handed down by miso masters through generations. Healthful bacteria and enzymes break down the carbohydrates and proteins into easily assimilable sugars and amino acids, beneficial digestive enzymes, vitamins and minerals. Such high quality miso is five times higher in protective isoflavones than other soy foods.

Koji is prepared using Aspergillus oryzae spores. This particular species is especially plentiful in the town of Okazaki, in Aichi prefecture where Eden Hacho Miso is produced. The Hatcho Miso Company located on Hatcho-cho (8th Street), makers of Eden Hacho Miso, was founded five centuries ago and is one of the originators of hacho miso. This miso is produced according to their traditional methods dating back to 1337 AD.

Eden Hacho Miso is the product of generations of experience and perfected techniques. The soybeans are cleaned, soaked, cooked, and crushed, then shaped into two inch crosses creating the maximum surface area for the growth of koji. The bean crosses are then lightly dusted with a mixture of Aspergillus oryzae spores and roasted barley flour, then incubated for 48 to 72 hours depending on the season. When incubation is complete the crosses are covered with a fragrant bloom of pale yellow koji growth. The koji covered crosses are mixed with a small amount of water and sea salt and transferred to huge cedar vats. These 200 year old vats are approximately seven feet deep and seven feet in diameter. Each vat holds several tons. Large pieces of thick cotton cloth and heavy wooden discs or pressing lids are placed on top of the inoculated soybean mixture. A pyramid of large river stones, usually 100 or more and equal to the weight of the soybean mixture, is built on top of the pressing lid. The enzymes from the koji slowly mellows the mixture, transforming the complex protein, carbohydrates and fats of the soybeans into dark, rich, flavorful miso as it ages/ferments for up to three full summers. It is then double bagged in a resealable, standing pouch. No chemicals or additives of any kind are used whatsoever.

Hacho miso has a distinctive richness, deep flavor and heartiness that makes it particularly suited to cooler climates or seasons. It has been taken on Japanese expeditions to the South Pole and Japanese mountain climbing expeditions as an easy to use and energizing food source with readily available protein. Ancient shogun warriors were fed hacho miso for strength and endurance, and the Emperor of Japan is said to enjoy hatcho miso every day.

Miso is rapidly gaining recognition in the West as a protective, delicious super food. Miso contains a wealth of enzymes and microorganisms that aid digestion and help to build healthy intestinal flora while keeping undesirable flora in check. During fermentation the protein of the soybeans and grain are disassembled into amino acids, including all eight essential ones.

The enzymes in miso aid in the digestion of protein and starches in grains, beans, and vegetables, making it an essential addition to a vegetarian or mostly vegetarian way of eating. Fermentation breaks down the trypsin inhibitors in soybeans allowing for full utilization of the protein. Miso soup is a satisfying way of regularly consuming two powerful healthy foods, miso and sea vegetables. 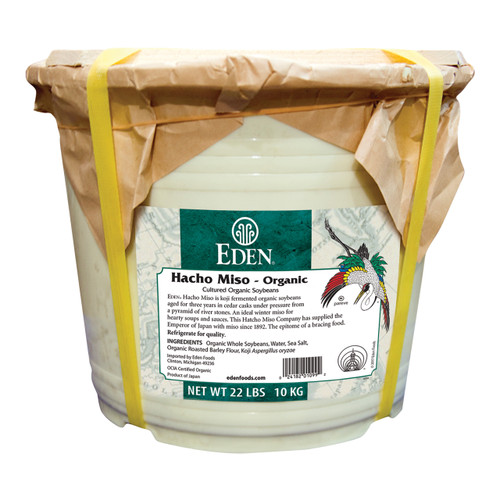