Popcorn's ability to pop is from the water in its starchy endosperm and it's hard outer shell or 'pericarp'. Heating it creates pressure inside until the out shell cracks and the inside explodes out releasing the water as steam. Eden Popcorn's reclosable standing pouch retains the moisture needed for popping. After resealing please refrigerate it to best ensure popping.

As with all whole grain, popcorn contains healthy antioxidants called polyphenols that remove cellular damaging toxins called free radicals. Researchers reported these findings at the 238th National Meeting of the American Chemical Society (ACS). Dr. Joe Vinson of the University of Pennsylvania said, "Early researchers thought fiber was the active ingredient for the benefits of whole grain' .... "But recently polyphenols emerged as potentially more important." Dr. Vinson further reported, "We really were surprised by the levels of polyphenols we found in popcorn. I guess it is because it's not processed."

Eden Popcorn is a healthier choice for you, yours, and the environment - there are no chemical additives, preservatives, pesticides, herbicides, fumigants, etc. It's rich in important healthy fiber and low calorie. It is satisfying and yet doesn't spoil ones appetite; an ideal snack food. Eden popcorn is low fat, contains no saturated fats or cholesterol, contains no sodium, is a good source of fiber, and is hearty 100% whole grain. 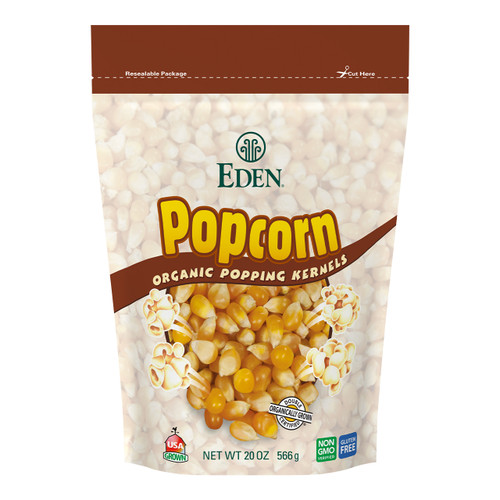