Eden Extra Virgin Olive Oil comes from centuries old, family tended olive groves in the Southern Andalucian region of Spain widely known for producing the world's finest olives and olive oil. The Andalucian region includes the provinces of Seville, Cordoba, Malaga, and Jaen. Approximately 60 percent of the world's olive oil is produced in Spain and of that percentage 80 percent is produced in the Andalucian region. Eden has purchased our Extra Virgin Spanish Olive Oil from the same producer for decades. A certificate of analysis accompanies each shipment, assuring Eden that each lot is truly Extra Virgin, cold-pressed, fresh and unadulterated.

A 100 percent blend of green and black olives are carefully selected, stone ground, and pressed using methods that protect flavor and nutrients. This method is often called cold pressed, as no heat is generated with this method, protecting the nutritional integrity, flavor, and aroma. Only the first pressing of these olives become Eden Extra Virgin Olive Oil. Carefully packaged in amber glass and nitrogen sealed to preserve nutrients, flavor, color, and bouquet that are degraded by ambient light caused photo oxidation.

Eden Extra Virgin Olive Oil is Prevention Magazine's "All Around Best Buy", rating the highest in flavor and protective nutrients of the twenty-two (22) brands of extra virgin olive oil researched. The taste test was held at the Rodale Food Center and conducted according to the standards of the International Olive Oil Council based in Madrid, Spain. The tasters praised Eden for its "Zesty, buttery, assertive taste."

Eden Extra Virgin Olive Oil also scored highest in a thorough comparison of nutritional value. The laboratory measured percentages of oleic acid and squalene, potent antioxidant essential fatty acids shown to reduce the risks of certain types of cancer. The ratio of oleic to linoleic acid was also compared. Research indicates that a higher oleic/lower linoleic ratio is most protective and Eden brand was found to have the best ratio. Comparing price per ounce of these olive oils Eden was cited as exceptional value, scoring higher yet costing less than all the other pricier olive oils.

According to the International Olive Oil Council, extra virgin olive oil has a free fatty acidity of not more than 0.8 grams per 100 grams and must be obtained from the fruit of the olive tree solely by conditions that do not lead to alterations in the oil and that have not undergone any treatment other than washing, decantation, centrifugation, and filtration. Eden Extra Virgin Olive Oil is from hand harvested olives delivered to the presser within a very few days of being picked. Olives are then pressed with a hydraulic press with no heat applied. The resulting oil has exceptional aroma and flavor. The free fatty acid test results vary from year to year and crop to crop due to seasonal weather conditions. Eden Extra Virgin Olive Oil independent lab free fatty acid test results for the last 8 years have ranged between 0.25 percent and 0.45 percent. Lab free fatty acid test results for 2020 were 0.25 percent.

Eden Extra Virgin Olive Oil contains a number of beneficial phytosterols (plant esters), including b-sitosterol, campesterol, and stigmasterol. Phytosterols are plant compounds that have a chemical structure similar to cholesterol competing with and effectively blocking the absorption of cholesterol, causing it to be excreted as waste.

Recently the FDA authorized a qualified health claim for olive oil based on research linking olive oil consumption with increased heart health. "Limited and not conclusive scientific evidence suggests that eating about 2 tablespoons (23 grams) of olive oil daily may reduce the risk of coronary heart disease due to the monounsaturated fat in olive oil. To achieve this possible benefit, olive oil is to replace a similar amount of saturated fat and not increase the total number of calories you eat in a day." A one tablespoon serving of Eden Extra Virgin Olive Oil contains 10 grams of monounsaturated fat."

Eden Extra Virgin Olive Oil is a delicious healthy ingredient for making salad dressings, sauces, sautéing, and in baking. Use it in an easy dairy free Pie Crust, in the recipe section of this site. 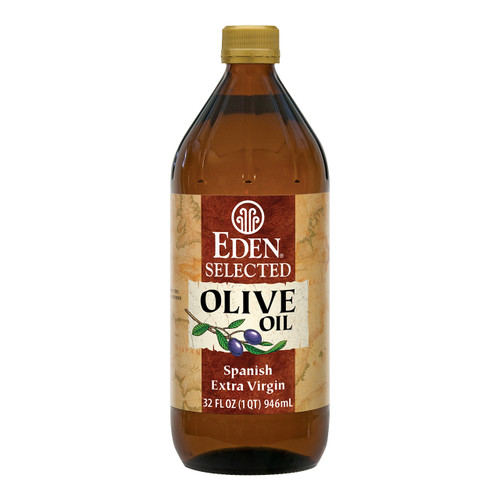