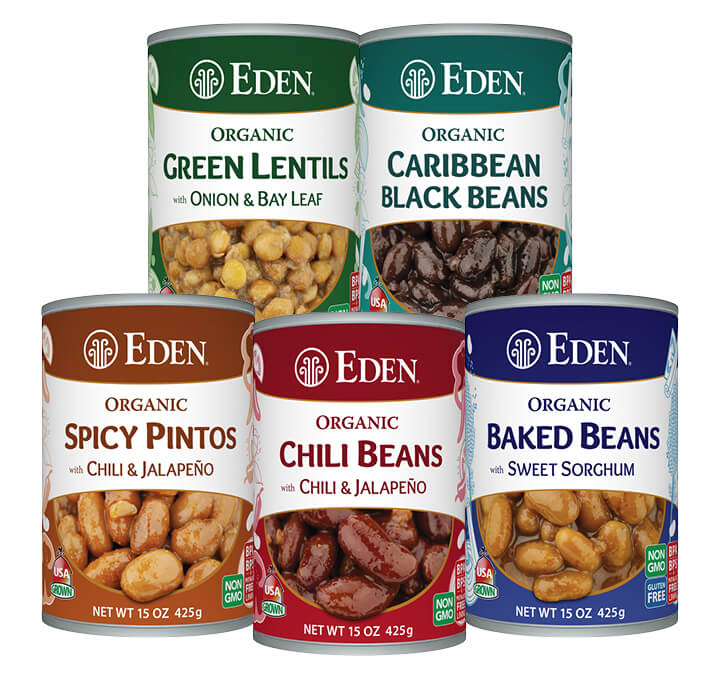 Eden Foods was convinced that seasoned, cooked, ready-to-eat beans options would be appreciated. With limited time for preparation of nourishing, delicious home-cooked meals, convenient high quality would be appreciated. To the stressed and tired, fast food beckons; but quick, stress free choices are at hand with a variety of heat & serve offerings. Eden Seasoned Beans, Rice & Beans, Chili of whole grain & beans, and Refried Beans are already cooked, ready to eat. Heat, stir, & serve as is, or use them to make short order meals.

Eden Dry Beans are the heart of EDEN pre-seasoned, heat & serve beans. Eden Foods has been encouraging organic bean farming since the late 1960s. EDEN beans are U.S. organic family sourced directly from the farms of folks Eden Foods knows and trusts. These salt-of-the-earth growers have used organic methods for decades. Their vital soil teems with life producing the best beans on earth. Most EDEN beans are grown in the Midwest, fairly close Eden headquarters. Garbanzo beans and lentils will not grow nearby because they need a more arid clime like California, Arizona, Montana, Colorado, and North Dakota.

Since 1991, EDEN Beans are canned at Eden Foods’ organic, Meridian Foods cannery in east central Indiana, prepared using home cooking methods. The beans are soaked overnight which much improves their taste and digestibility. There is no other cannery we are aware of doing this in the U.S.

They are then canned and pressure-cooked.

In preparing to make beans, Eden Foods was told it was necessary to add at least two chemicals, calcium chloride to harden the skins so they wouldn’t fall apart during cooking, and EDTA (ethylenediamine tetra-acetic acid) to hold the color. Fortunately, the decades organic vital soil in which EDEN beans grow gives the beans a higher mineral content. This allows them to be cooked without the need of extremely undesirable processing chemicals.

After learning about the toxic chemical bisphenol-A (BPA) from a source in Germany in 1995, Eden Foods spent over 2½ years persistently trying to get an answer to the question, “What is the food contact surface of food cans?” Those efforts were repeatedly thwarted by industry and government barriers. After years of spin and assurances that BPA was ‘safe,’ Eden Foods was directed to an attorney in Washington, D.C. representing the canning industry who informed us that we had no right to know, they had no duty to disclose what those surfaces were. That information was protected as corporate “proprietary information” and “trade secrets.” We as citizens, as Eden Foods - buyer of millions of cans, as parents and grandparents, we have absolutely no right to know what those food contact surfaces are. Unfortunately, use of these barriers to information are common in the food and food packaging industries. A can linings of some sort is necessary to prevent interaction between the food and tinplate steel of the cans.

The term refried implies that beans are twice fried. This is not so. In Tex-Mex cooking, beans are soaked overnight, cooked until tender, mashed, and then fried with lard or bacon fat, onion, garlic, and spices; but they are only fried once.

The English term ‘refried beans’ is an adaptation of the Spanish term frijoles refritos. Frijoles means beans, and refritos means well fried. A contributing factor may have been a Mexican custom of adding the prefix ‘re’ to emphasize a word’s special meaning. As delicious and versatile fried beans spread into North America, the name ‘refried’ was carried along.

Organic EDEN Refried Beans are not fried at all. To make EDEN Refried Beans, beans are washed, soaked overnight, and blanched until soft. Most of them are pureed. Some blanched whole beans are mixed in with the puree for a better looking, more enjoyable experience. The puree is lightly salted with EDEN Sea Salt and cooked with purified water in a steam jacketed kettle that mixes them as they cook. After this cooking, the puree is filled into cans, sealed, and pressure cooked to finish them.

There are five kinds of EDEN Refried Beans: EDEN Spicy Pinto and Spicy Black Beans with organic herbs & spices. EDEN Refried Pinto, Kidney, and Black Beans that are simply lightly salted. In preparing to serve them, there is the option of adding oil and/or water to achieve a desired consistency. Adding extra seasonings is common, with vegetables like onions, garlic, peppers, and corn. EDEN Refried Beans make exceptional Mexican dishes like burritos, quesadillas, tacos, tostadas, dips, and spreads. They also make a delicious, creamy base for soup and stew.

Commercial refried beans have excessive salt, poor quality beans, chemically refined vegetable oils and/or animal lard, and toxic chemical processing aid and conditioners like BHA (butylated hydroxyanisole) and BHT (butylated hydroxytoluene). Organic EDEN Refried Beans contain half the sodium of other brands because the beans taste so good to begin with. EDEN Refried Beans are naturally low fat and the is fat beneficial and from the beans.

Men’s Health selected EDEN Refried Beans as the best for flavor and nutrition among all other brands. Nutrition Action Newsletter rated them as a Best Bite earning the highest score for nutrition among 38 brands studied.

Stews of seasoned hearty food deliver satisfaction all over the world. Eden prepares four outstanding chilies of beans and whole grains: EDEN Pinto Bean & Spelt, Kidney Bean & Kamut, Great Northern Beans & Barley, and gluten free Black Bean & Quinoa Chili. The whole grain and bean combinations are brought to life with organic vegetables, herbs, and spices. Beans are a good source of two essential amino acids that are not found in grain, lysine and threonine. When beans & grain are combined, they provide complete protein. EDEN CHILI also offers slow-burning complex carbohydrates, a host of vitamins and minerals, and beneficial soluble fiber. The whole grain, shiitake, and maitake mushrooms in EDEN CHILI give them a chewy texture as expected in chili. Everything but the mushrooms (grown chemically free) is certified organic. Beans, barley, kamut, and spelt are U.S. grown. Quinoa is small plot, high altitude grown in the Andes Mountains.

In making EDEN Chili the beans soaked overnight, blanched, and then thoroughly cooked with a whole grain in a savory sauce of organic tomato puree, organic chili spices, herbs, and vegetables, and a touch of EDEN Sea Salt. Most chilies contain meat. Natural brands are made with textured vegetable protein (TVP) that is from chemically refined, genetically engineered soybeans. Award-winning EDEN Chilies are unique. They are U.S. organic family beans and whole grains. EDEN Chilies were selected Grocery Headquarters’ Selling Wellness Trailblazer Award winner in the ‘Meal Maker’ category. They were deemed a ‘Best Food For Women’ by Women’s Health, and both a ‘Best Food For Men’ and one of ‘125 Best Foods for Men’ by Men’s Health. They make it easy to have Pure, delicious, highly nutritious satisfying meals in minutes. Enjoying a variety of beans and whole grain is a solid step toward healthy living.

Studies show beans contain a wealth of antioxidants similar to those in berries and fruits. “Beans are really loaded with antioxidant compounds,” said Clifford Beninger, Ph.D., an environmental biologist and former researcher for the USDA’s Bean Research Unit. “We didn't know how potent they were until now. In general darker colored seed coats were associated with higher levels of flavonoids, and therefore higher antioxidant activity.” Researchers tested the antioxidant activity of flavonoids found in 12 common varieties of dry beans. They found one class of compounds in particular, anthocyanins, were the most active antioxidants in beans. These findings add antioxidant activity to a growing list of healthy compounds found in beans and legumes. The study was published in the Journal of Agricultural and Food Chemistry.

Beans are an important source of two essential amino acids not found in cereals, lysine and threonine. Whole grain and beans together deliver complete protein. EDEN Rice & Beans are already cooked, just heat, stir, and serve them. They make quick burritos topped with salsa or mix them with a can of EDEN Refried Beans for a better burrito. For soup and stew, add a variety of vegetables, water or stock, adjust the seasoning as desired, and simmer until the vegetables are tender.