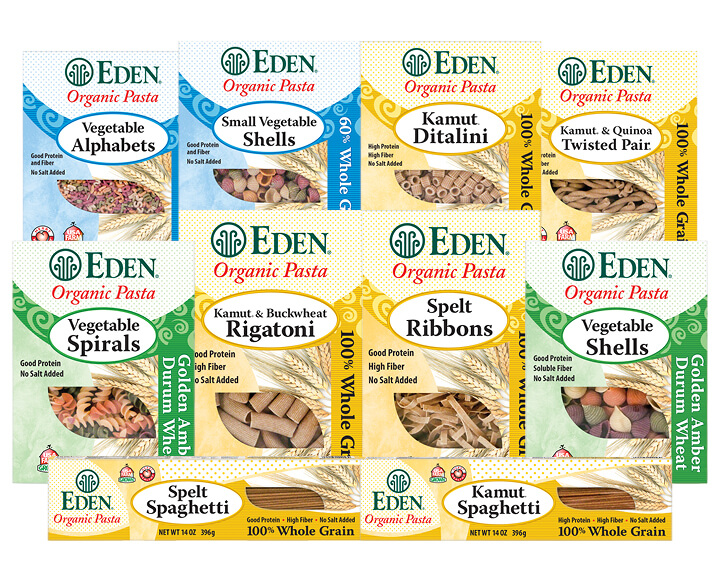 In the early 1970s, encouraging people to eat whole grain, making that convenient as possible became an Eden Foods focus. A working relationship with the Schmidt Noodle Company, founded in Detroit in 1923, was established. After Eden Foods’ experimentation, learning how to mill whole grain flour that made good pasta, Schmidt Noodle began to make deliciously smooth, whole grain organic spaghetti. Organic whole grain Eden Pasta became available to Midwest natural food stores and co-ops in 1977. In 1982, at the request of its owner, Eden Foods bought the pasta factory and renamed it the Eden Organic Pasta Factory (EOPC). In 1989, it earned the distinction of becoming North America’s first third-party certified organic food processing facility.

The people at this small factory have carried traditional methods forward with dutiful handling and processing techniques that long ago disappeared from commercial pasta making. Eden Foods often refers to EOPC as a functioning museum. Seeing how it is done, visitors still consider the pasta handmade, even though there are traditional machines being used. Recently, Eden Foods completed a refurbishing of the Pewabic Pottery decorated 1923 factory that will allow it at least another 50 years.

Whole grain provides a broad range of nutrients in the proportions people need for good health. It is central in a healthy person’s diet. Whole grain balances and purifies. It has three main components, endosperm, bran, and germ. Refined white flour denies us necessary nutrients. White flour was encouraged for its long shelf life, and to allow large scale centralization and monopolization of essential food. Whole grain provides protein, complex carbs, fiber, B vitamins, vitamin E, antioxidant polyphenols, and essential minerals like calcium, iron, selenium, zinc, magnesium, and copper. Whole grain, and pastas made from real whole grain, cause us to burn up to 25 percent more calories per day when compared to refined flour foods. Whole grain is more slowly metabolized. It reduces stress, significantly

Around 1870, millstones used to mill grain into flour were replaced with metal rollers. Commercial flour mills across Europe and America converted to a new, faster steel roller-mill flour method over a span of about 10 years. This made it extremely easy to isolate various parts of the grain while processing unprecedented huge amounts of grain. Shelf-stable flour was now easy; not healthy, but easy and cheap. Large scale centralization required long shelf life flour. Roller mill white flour was the answer. It provided additional cash flow in selling the bran and germ as animal feed or for oil production. These misguided developments made it impossible for a traditional flour miller to survive.

Stoneground white flour entails sifting out bran and germ through cloth of specific weaves. This produces fine flour that contains very little bran and germ, but still contains the grain’s germ oil that was released during grinding. The oil from the germ gives flour an off-white color and it begins to oxidize soon after milling. Shelf life is therefore relatively short compared to what long distribution channels demand and roller mills can easily deliver.

In roller milling the bran and germs are scraped away from the grain before the grain is ground into flour. The prevents oils/fats from intermingling with carbohydrates and produces a pure white, long shelf flour. Bran and germ removal also removes the parts of the grain that we need to digest the milky white endosperm; nourishing components including fatty acids, vitamins, minerals, phytonutrients, polyphenols, and antioxidants. Lack of understanding about what is necessary in a healthy diet allows flour mills to make flour with its vital, essential nourishment removed.

As understanding grows, a return to whole grain flours is happening. Eden Whole Grain Pastas are part of this.

Eden pastas are made from five family farm organically whole grains: high Plains golden amber durum wheat, Khorasan wheat (kamut), spelt wheat, buckwheat, and quinoa from the Andes plateau. They are farmed by those committed to creating vital soil, cleansing the environment, and producing the safest, most nutritious and delicious food.

Each step in making Eden Pasta helps to create fine texture and flavor. This begins with careful selection of organic grain. All whole grain for Eden pasta is milled at Eden Foods. The organic semolina and patent durum flours are milled at a certified organic mill in North Dakota. Organic seasonings and organic vegetable powders like carrot, annatto, beet, spinach, and Jerusalem artichoke are added to some pasta for variety of nutrition, taste, and color.

EOPC kneads flour and water to develop a dough. For pastas like Eden Spirals, Shells, Elbows, Alphabets, Ditalini, Gemelli, Rigatoni, and Spaghetti, the dough is pushed through vintage brass dies using a traditional screw press and then cut to length. For Eden Ribbon Pasta, dough is rolled out and folded over itself eight times. These laminated sheets are cut to width and length. After shaping, the pastas are steam dried, gradually reducing their moisture, drying them from the inside out. The drying process can take from 27 to 48 hours, depending upon the cut of pasta and seasonal humidity. Each step helps to create pasta of exceptional flavor, texture, and character.

Commercial pasta is made from highly refined, chemically treated flour, processed in minutes through Teflon dies, dried with microwaves or ultra-high heat resulting in a void of nutrients and value.

Each Eden Pasta box has an Eden tested recipe on the back, with a photo of it prepared.

With variety of Eden Pasta in the pantry, it’s a snap to make delicious, satisfying, wholesome meals in very little time. Add vegetables, a can of Eden Beans, Eden Spaghetti Sauce or Pizza Pasta Sauce, a drizzle of Eden Extra Virgin Olive Oil, and seasonings for a good meal in minutes.