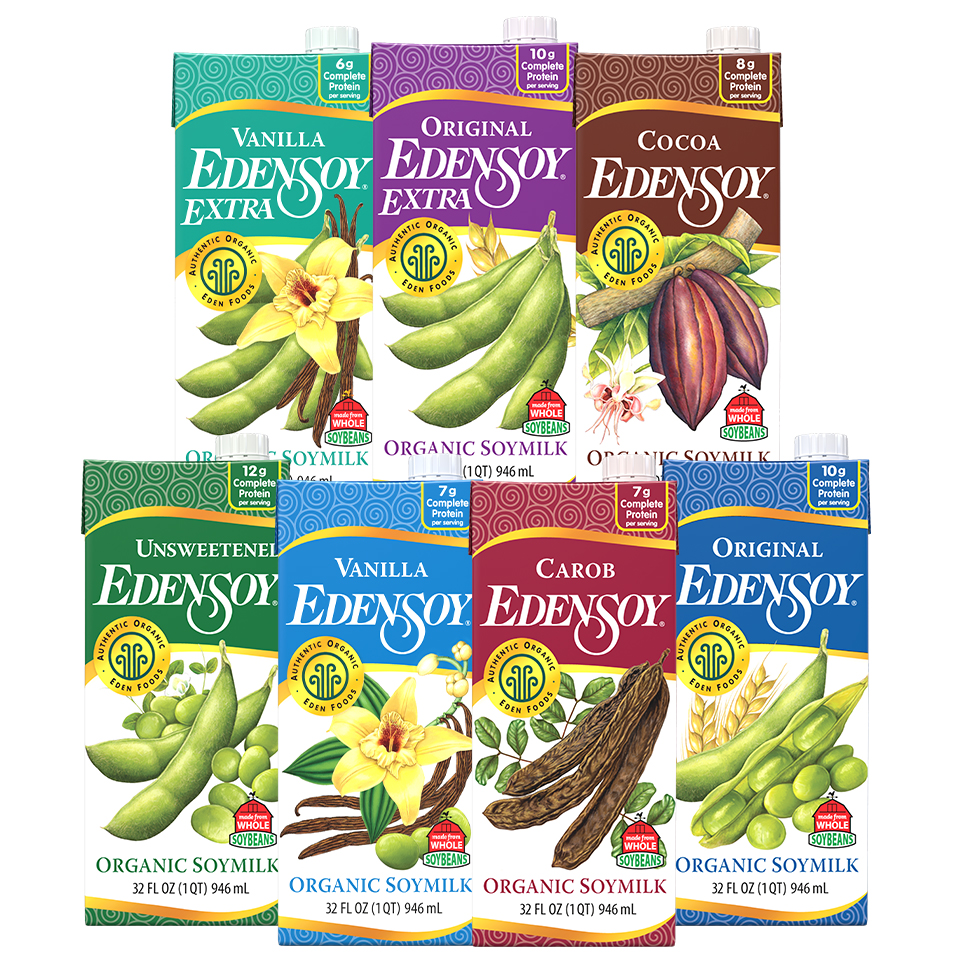 January 1983, Eden Foods discovers wonderful soymilk in Osaka, Japan. The results of new techniques developed at Cornell University using a narrow range of temperatures and pressures. Through combined efforts of a traditional miso maker and Eden Foods, EDENSOY soymilk began shipping to the USA in July, 1983 in cases of 30, 6 oz retort pouches. Within months, EDENSOY became the natural food industry’s highest velocity item. Plans were laid to move its production to the USA. The phenomenal success of EDENSOY created a new grocery category in the U.S. — non-dairy liquid food. EDENSOY production began in Michigan the last week of November 1986 in new Tetra Pak cartons.

Soybeans require exacting preparation, thorough cooking, or specific fermentation to prepare them as superb nourishment for human beings. Unlocking the storehouse of nutrition in soybeans has always required very specific technique, or in the case of cows, four stomachs. To prepare soy properly requires knowledge of what the results need to be, and a focused will to accomplish it. Know-how and the equipment to carry out an exact process are necessary. Understanding and achieving this result is unique to EDENSOY. There is no other American soymilk that that approximates this achievement.

EDENSOY personifies a miso maker's comprehensive appreciation of the proper preparation and choice of soybeans. Japanese processing equipment and Swedish aseptic packaging equipment contribute to the best possible nourishment from whole soy. EDENSOY is the only soymilk made in the USA that is actually designed to nurture human beings.

If imitation is the highest form of flattery, then EDENSOY has been highly regarded.

Imitations abound, but none of them carry out intelligent soy preparation. They are adulterated and have ignored the subtle necessities that must be addressed in soybeans to create wonderful human food from them.

Soybeans are now predominantly genetically engineered. EDENSOY has always been GMO free, long before understanding the harm of genetically modified organisms (GMOs) began to develop. Foreseeing the commercialization of GMOs, Eden Foods took every step necessary to maintain EDENSOY purity. In 1993, a system to avoid GMOs and their derivatives was created and implemented, not only for EDENSOY, but for every Eden food. The system requires participation of Eden growers and suppliers. By 1997, thorough GMO testing protocols were completely and reliably in place. To keep EDENSOY non-GMO is a great deal of work, including multiple tests of all seed, the growing plants, after harvest at the elevator, and upon receipt at the soymilk factory. When the New York Times tested 11 soy and corn-based foods, only one tested GMO-free, and it was EDENSOY. Today, these non-GMO supply systems remain effective.

Eden Foods also avoids any pharmaceutical enzymes and enzyme invalidators (flavor maskers) that are ubiquitous in other soymilks. Soymilk that is not properly prepared has a distinctive beany, grassy flavor that requires the use of a chemical flavor masker. These chemical additives are pervasive and undeclared, because the necessity of correcting the flavor of soymilk results 100% of the time if the soybeans are not appropriately prepared. Knowing what is correct is required, as is the engineering and technical expertise to carry it out. The right variety of soybean is also critical. Eden has been working with its farmer base since the early seventies and they consistently provide what is needed.

On August 18, 2008 Eden Foods presented EDENSOY to the Non-GMO Project (The Project) for non-GMO verification. After thorough analytical study of everything from seed to aseptic carton, EDENSOY became the first soymilk in America to be verified compliant with The Project’s standards for avoiding GMOs!

EDEN soyfoods achieved the highest score, 955 out of 1,000, and the top rating in the Organic Soy Scorecard that presents a study carried out over a year-and-a-half into the social, environmental, and health impacts of soyfood in North America. The Cornucopia Institute, an independent advocate working to preserve organic integrity and create economic justice for family farmers, released the report. It evaluated 62 organic American soyfood brands and rated them on 10 criteria including sourcing, stringency of organic certifier, avoidance of GMOs, and chemical contamination. Eden Foods was declared a ‘Hero’ and ranked by far the highest in the food industry. Read the report at: www.cornucopia.org

73% of EDENSOY packages are from certified sustainable forests that ensure biological biodiversity and protect endangered species. Filled EDENSOY cartons require no refrigeration in transport or storage, and they are recyclable. Refrigeration is completely unnecessary until the package is opened at home. The Environmental Protection Agency (EPA) reports pollution from refrigeration has increased exponentially since the 1990s. EDENSOY avoids unnecessary energy use.

For aseptic package recycling centers contact your local recycling program, or search for the nearest recycling facility at: Recycle Cartons

Whole soybeans have been important human food for millennia. Chemically treated and extracted soy is not good food. Only recently has Western science confirmed soy as an important and healthy food. Dairy and meat concerns strongly oppose this logic. In 1999, the FDA recognized the role of soy in reducing cholesterol saying, “25 grams of soy protein a day, as part of a diet low in saturated fat and cholesterol, may reduce the risk of heart disease.” Whole organic soyfood, as is EDENSOY, provides these desired benefits. Soy isolate concoctions, and the like, can be detrimental and damaging to one’s health.

As soyfoods became popular for health benefits, commercial food makers rushed through shortcuts to imitate soymilk. Though labeled as healthy, the imitations are carelessly made with dubious ingredients, i.e. cheap imported soy and grain, hexane extracted soy protein treated with toxic petrochemicals and unsavory additives. Undeclared GMO pharmaceutical enzymes and chemical flavor maskers are the norm, as are refined sugars and chemicals as flavor. Evaporated or dried cane juice is sugar. Organic Sugar in the USA is actually an oxymoron. Burning down the everglades to get two or three crops of sugar cane, and then burning down more everglades to continue to grow it, is not organic agriculture by our definition.

Soymilk’s popularity coincided with a sudden, wide use of unethical-but-legal new labeling rules that were secretly initiated. They deleted the requirement of every food ingredient having to be declared on a food’s label. This fundamentally changed and limited the definition of ingredient to only those things that impact the nutritional information panel. Overnight, thousands of unappealing, toxic food ingredients no longer had to be declared or listed on packages. This made it nearly impossible for people to differentiate EDENSOY from cheap commercial versions masquerading as natural food. A complete, hush-hush, industry/government coup fundamentally changed America’s food rules. These changes institutionalized fraud as the #1 way to make food profits. The coup caused huge amounts of easy cash to encourage the new unethical paradigm and misinformation about food & health.

Two concurrent events, EDENSOY popularity and new labeling laws allowing legally hidden ingredients, resulted in major damage to public perception of soymilk. The public was hoodwinked with cheap, intentionally fraudulent imitations that were chemically flavor masked, and EDENSOY’s availability diminished. Having been misled with a cheap price and false information, people were guided to distasteful, unsavory alternatives that were big-money marketed as better than anything prior. This is an example of the ‘whoever tells the biggest lie wins’ formula so commonly affecting us all today. Additionally, government and industry collusion against soy and for animal foods were and remain enormously funded.

Though labeled healthy, many plant-based milks are made of the cheapest available ingredients, such as hexane-extracted GMO soy isolates treated with a host of toxic petrochemicals, and untoward additives. So-called natural flavor is an ingredient commonly found in soy, grain, and nut milks today. These flavors are made using petrochemicals, emulsifiers, preservatives, ethanol, and synthetic propylene glycol. Often, the natural flavors contain more chemicals than artificial flavors, according to the Environmental Working Group (EWG). The FDA does not require listing of common “incidental additives” on food labels. Furthermore the EWG says, “Flavor extracts and food ingredients that have been derived from genetically engineered crops may also be labeled “natural” because the FDA has not fully defined what the term “natural” means. The American soymilks that we are aware of, except for EDENSOY, contain FDA allowed undeclared, unsavory, untoward chemical flavor maskers and other incidental ingredients.

Whole food sources of phytonutrients are always better than GMO-derived isolates and chemical imitations. Every ingredient in EDENSOY, andin every Eden food, is dutifully declared on its label.

Original EDENSOY was the first commercial soymilk in America. All EDENSOY is made from USA Midwestern family-grown organic soybeans and grain. It is low sodium and provides the purest, highest quality soy protein, essential fatty acids, and an entire range of nutrients including all essential amino acids, calcium, potassium, B vitamins, minerals, trace elements, and phytonutrient antioxidants. Clean, gentle, naturally malted whole grain barley/wheat extract and organic maple syrup sweeteners used in EDENSOY provide far better nourishment and flavor than the widely used refined sugars such as evaporated cane juice and GMO enzyme-converted starches. EDENSOY is the only soymilk made with the nourishing sea vegetable Kombu, adding valuable trace minerals and flavor enhancement. All EDENSOY is k pareve.

Vanilla EDENSOY is the only soymilk in the USA made solely with 100 percent real, pure vanilla extract (no test tube chemicals). Pure vanilla extract is from vanilla beans of the orchid tree Vanilla planifolia. It contains more than 250 flavor and aromatic compounds creating its unique flavor and aroma. It is labor intensive to extract these essences. Vanilla orchids are hand pollinated to produce vanilla pods called beans. The beans are hand harvested, trimmed, and allowed to age or cure. The best are aged for two years. Pure vanilla extract tastes clean and exciting, is naturally sweet and has an alluring aroma. Imitation vanilla, artificial vanilla, and vanillin are petrochemicals. Those labeled on packages as ‘natural vanilla flavor’ and ‘organic vanilla flavor’ are made using hexane gas, animal glycerin, propylene glycol, and a googol of other synthetic chemicals. These imitations pale in comparison to the complexity and wonderful flavor and aroma only found in real, pure vanilla extract. Vanilla EDENSOY has a lovely vanilla bouquet and a soothing clean taste that is naturally sweet.

Carob EDENSOY is made with organic carob. Carob has a unique chocolate-like flavor that is free of caffeine, theobromine, and oxalic acid. It is a healthy alternative to chocolate for those avoiding caffeine. Eden carob is made from the finest organic Mediterranean St. John’s bread powder, a.k.a. carob powder, and carob extract. Both are from the seedpods of the evergreen Ceratonia siliqua.

Cocoa EDENSOY is made of Eden selected pure organic cocoa from the Dominican Republic. After harvest, and a much-involved traditional handling that includes fermenting the bean pods, they are dried and shipped to Europe to be milled into traditional dark cocoa powder. All of this is done without harsh, character changing, alkali processing used on commercial cocoa. Research shows that chocolate, particularly dark cocoa powder, has beneficial antioxidant flavonoids called flavonals including procyanidins, epicatechins, and catechins. Joe Vinson, Ph.D., chemistry professor at University of Scranton states, “Think real cocoa. Pure cocoa powder has the most antioxidants (not instant hot chocolate), followed by dark chocolate, then milk chocolate.

Unsweetened EDENSOY is the highest in whole soy protein of all EDENSOY, and all American soymilks, with 12 grams per serving. It provides 4.5 grams of essential fatty acids (EFAs), omegas 3, 6, and 9. It is the ideal choice for those avoiding sweeteners and gluten. Use it cup for cup when substituting for other milk. For soy buttermilk, place 1 tablespoon of organic EDEN Apple Cider Vinegar or lemon juice and 1 tablespoon of EDEN Extra Virgin Olive Oil in 1 cup of Unsweetened EDENSOY, and let sit for 3 to 5 minutes until thick. Then use it as you would dairy buttermilk in baking.