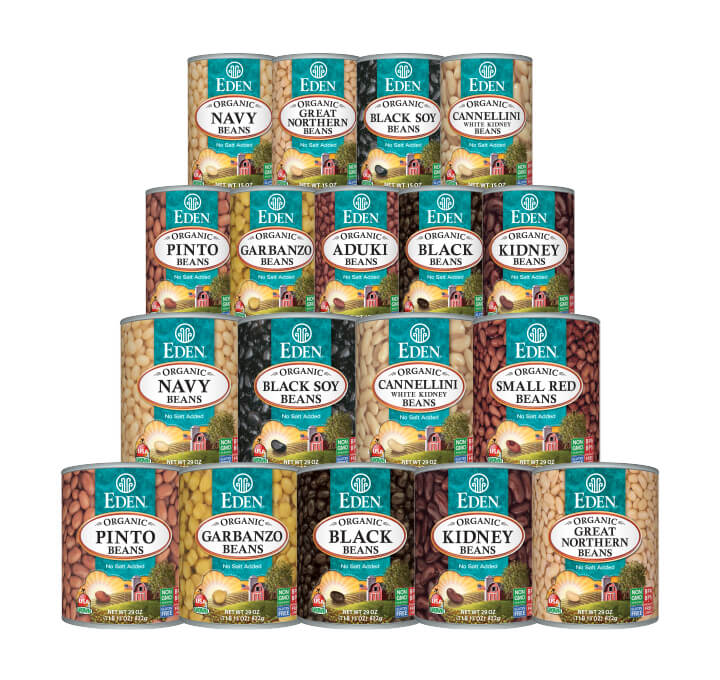 Cream of the Organic Crop – USA

Eden Foods has inspired organic bean farming since the 1960s. EDEN Beans are USA organically grown, purchased directly from American families we know and trust. This network of salt-of-the-earth growers has used organic methods for decades. Rich, vital soil teems with life and the farmer’s practiced tending produces the best beans on earth. Most EDEN Beans are grown in the Midwest not far from our headquarters and bean cannery. Garbanzo beans and lentils require more arid climes and they are grown in California, Arizona, Colorado, or North Dakota.

EDEN Beans are delicious, unlike chemically produced commercial beans. They are exceptional food and include antioxidant flavonoid anthocyanins and polyphenols, minerals, vitamins, protein, and complex carbs. Their amino acids, such as lysine and tryptophan, perfectly complement whole grain, providing complete protein in doing so. Their highly soluble fiber helps regulate blood sugar and lower cholesterol, while the insoluble fiber aids the intestines, controls appetite, and assist in weight management.

Beans contain a wealth of antioxidants similar to those in fruits and berries. “Beans are really loaded with antioxidant compounds,” said Clifford Beninger, Ph.D., an environmental biologist and former researcher for the USDA’s Bean Research Unit. “We didn't know how potent they were until now. In general, darker colored seed coats were associated with higher levels of flavonoids, and therefore higher antioxidant activity.” Researchers tested the antioxidant activity of flavonoids found in 12 common varieties of dry beans. One class of compounds, anthocyanins, were the most active antioxidants in beans. The findings added antioxidant activity to a growing list of healthy compounds found in beans. The study was published in the Journal of Agricultural and Food Chemistry.

“Beans are probably the best human plant food there is,” plant geneticist George L. Hosfield Ph.D., told Reuters Health. “With the additional bonus of their antioxidants, you have almost the perfect food.” He explains that beans are full of protein and fiber, low in fat, and contain the important vitamins and minerals folic acid, iron, potassium, and zinc, while their complex carbohydrates provide steady energy.

Cooking EDEN Dry Beans from scratch is not difficult, and the results are the best. Comfort emanates into the home while they cook, as they are served, and after they are enjoyed, whether as a side, with grain, as a soup or stew. Each Dry Bean box includes an Eden kitchen-tested recipe. For helpful tips, preparation, soaking, and cooking instructions, visit Dry Bean Cooking Basics.

People require convenience. So, Eden located a cannery with a well-established reputation for making the best canned beans, and began making them in 1991. All EDEN Beans have been canned at Eden’s certified organic k cannery, Meridian Foods, in east central Indiana since then. The methods used there were developed in home kitchens – wash, soak overnight, blanch, can, and cook the proper length of time. Soaking them overnight makes a huge difference, but no other American cannery does this, because it is time-consuming and uneconomical. The unique step of soaking beans overnight makes them taste better and easier to digest.

When Eden Foods first began learning how to can beans, we were told it was necessary to add at least two chemicals: calcium chloride to harden the skins so they wouldn’t fall apart during cooking, and calcium disodium ethylenediaminetetraacetic acid (EDTA) to hold the color. The vital organic soil in which EDEN Beans are grown gives them a higher mineral content. This allows them to be cooked without the need of these extremely undesirable processing chemicals. Since EDEN Beans do not contain untoward ingredients, the water they are cooked and canned in is suitable to consume, and use in cooking. Most EDEN Beans are cooked with a bit of kombu sea vegetable. You cannot taste the kombu, but its rare trace mineral content enhances and expands the beans’ flavor, so excessive salt to impart taste is unnecessary. EDEN unflavored, plain canned beans have no salt added.

Learning about the endocrine disrupter bisphenol-A (BPA) from a German source in 1995, Eden Foods spent more than 2½ years persistently trying to learn, “What is the food contact surface of food cans?” Those efforts repeatedly hit barriers, but eventually changed the entire American food can manufacturing industry, causing it to cease use of BPA, BPS, and phthalates.

Toward the end of that process, Eden was directed to a Washington, D.C. law firm representing the canning industry. They informed Eden that it had no right to know, and they had no duty to disclose, what those food contact surfaces were. This information was protected by law as “proprietary information” and “trade secrets.” We, as either citizens or Eden Foods (the buyer of millions of cans), had (and have) absolutely no right to know what the food contact surfaces actually are. Unfortunately, barriers of this sort are very common in the food industry.

Eden has done enormous work researching can linings on behalf of us all.

Can linings are absolutely necessary to prevent interaction between food and the tinplate steel of the cans.

Beans are one of the oldest cultivated plants. Beans have been vital to the well-being of people since ancient times, and still are today. The domestication of beans and legumes is key to understanding the history of agriculture. They are linked to early cultures that transitioned from being hunter-gatherers and began becoming agrarian, stay at home cultures. Beans (including peas and lentils) and grains were the first domesticated crops. Cultivation goes back at least 10,000 years in the Americas, and 20,000 years in Eastern cultures where bean fermentation also had significant social impact. Fermentation unlocks the storehouse of nourishment in soybeans, making them easy to assimilate and adding additional values.

Today, there are more than 150 countries that grow beans. There are 40,000 kinds stored in seed banks. Very few varieties are commercially cultivated. Beans come in hundreds of shapes, sizes, and colors, and can be stored for years, making them essential to any food security plan, whether personal or national. They are relatively easy to grow and require low amounts of water to thrive. Beans compliment most foods making them extremely versatile. When cooked, one pound (two cups) of dry beans yields six cups of highly nutritious, protein-rich food. They provide exceptional fiber, very healthy fats, and complex carbohydrates for lasting energy. Their minerals, vitamins, and many phytonutrients help ensure that they always provide a lasting satisfaction when eaten.

A book titled ‘The Power of Pulses’ – Saving the World with Peas, Beans, Chickpeas, Favas, and Lentils, proclaims beans the “food of the future,” capable of providing food security as climates change. In addition to the known health benefits, the authors remind us that beans are “nitrogen fixers,” leaving soil more nitrogen rich after harvest than before planting. They are excellent in an organic crop rotation system.

Beans are the only cultivated plant food that fixes nitrogen into the soil due to a distinctive type of bacteria in their root nodules. Bean plants produce nitrogen rich protein in their seeds, while depositing nitrogen in the soil. This unique action increases soil fertility while producing a food crop.

Beans are a vitally healthy, go-to protein source for humans. They are an essential part of a good diet, but sorely underappreciated. Dr. Joan Sabaté, professor in the Department of Nutrition at Loma Linda University, reported at the International Congress on Vegetarian Nutrition (ICVN) that simply reducing the consumption of beef and substituting beans would significantly reduce our environmental footprint worldwide by reducing greenhouse gas. Beans are relatively easy to grow organically, and useful as a transitional crop toward organic farming. Unitarian Service Committee Canada maintains that switching from toxic chemical-based methods to sustainable farming can increase crop yields up to 79 percent, which is hugely compelling.

Many plants and animal foods contain glycoproteins, protein molecules with a sugar molecule attached that acts as an antigen. These proteins are referred to as lectins, and are also known as haemagglutinin or phytohaemagglutinin. There are different types of lectins, many of them necessary for various cellular functions of our body. However some foods, especially certain beans, contain levels that cause digestive issues when eaten after being improperly prepared. According to the Food and Agriculture Organization (FAO) of the United Nations and the FDA’s Bad Bug Book: Foodborne Pathogenic Microorganisms and Natural Toxin Handbook, “bean lectins are inactivated by heat and rendered harmless by proper soaking and cooking.”

EDEN Beans are washed and then soaked overnight in stainless steel soaking tanks, after which the soaking water is discarded. The soaked beans are then steam-blanched and rinsed before being pressure-cooked for a specified amount of time, depending upon the bean variety. Pressure cooking thoroughly inactivates lectins. Traditional fermentation methods, such as those used in making EDEN Miso, Shoyu, and Tamari, also completely eliminate lectins. Those soybeans are washed, soaked, and cooked prior to fermentation.