In early Spring when the energy of the plant is still concentrated in the dandelion root, they are harvested and simmered into a dark thick syrup. The bitter compounds, eudesmanolides, are credited with its sought after qualities. No additives or preservatives. Amber glass jar.

Eden Yansen - Dandelion Root Concentrate is produced in Japan from Japanese dandelion root. The roots are harvested before the plant blossoms, when the energy of the plant is concentrated in the root. The roots are washed, chopped into small pieces and simmered over a low flame for several hours. The cooking water is then strained to remove impurities. The roots are simmered again in the strained water and stirred periodically until it becomes a thick paste. The concentrate is then sealed in dark glass bottles to preserve freshness. Eden Yansen contains no artificial coloring agents, preservatives or additives.

Eudesmanolides, a group of compounds that give dandelion root its bitter side, are believed to stimulate the appetite and promote healthy digestion.

A perennial herb that is a member of the daisy family, dandelion grows wild especially in temperate areas of North America, Europe and Asia. For thousands of years, in both the East and West, dandelion Taraxacum officinale or Leontodon utumnales has been valued as a food and beverage, and for its health promoting properties. Chinese and Japanese herbalists have used dandelion leaves, stems and roots for thousands of years. Written records from the 10th century mention the wide use of dandelion by Arabian physicians. There are also written records of dandelion being used by Ayurvedic practitioners in India and many Native American tribes.

Eden Yansen - Dandelion Root Concentrate is quick, simple and easy to use. Dissolve 1/4 teaspoon of Yansen in an 8 ounce cup of hot water or tea, stir and drink while hot. It may also be taken directly. 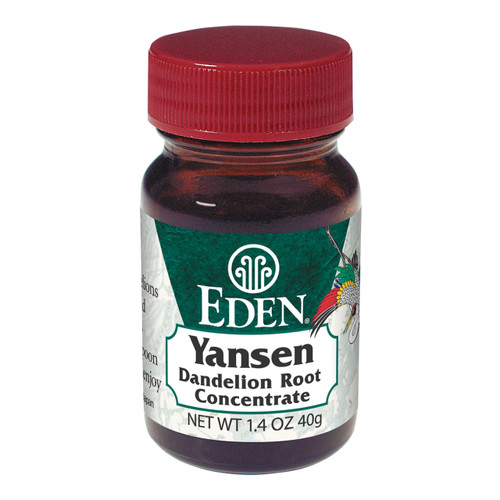